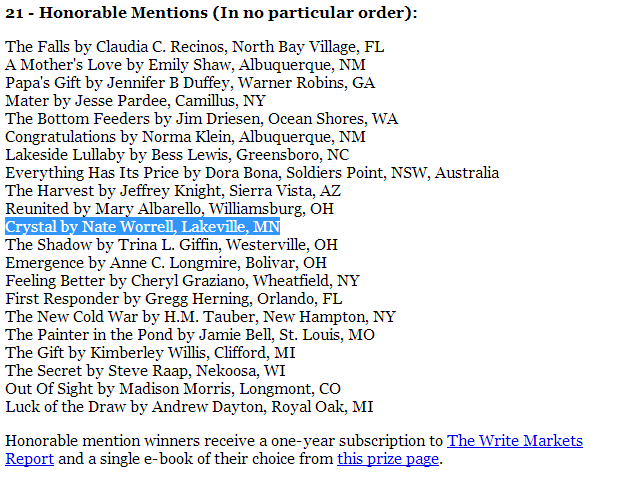 Writer's Weekly's 24 hour contest is quickly becoming my favorite contest.  This is my third time around. I'm bummed I'll have to sit out the fall contest due to other plans.

Several things level the playing field for this contest:
Plus there are tons of ways to win something.  You could place, and get cash + prizes.  You could earn an honorable mention (like me) and get a prize.  You could get a prize just for entering via raffle!

Here is the prompt for this round, which must be used in some way in a piece under 950 words:


Holding the sleeping infant on her shoulder, she gazed peacefully at her surroundings. Tourists wandered in and out of stores, an old man was setting up his easel by the lakeshore, and a child's balloon escaped into the breeze. A moment later, she looked up as shouts startled her and the baby. Everybody was running in her direction... 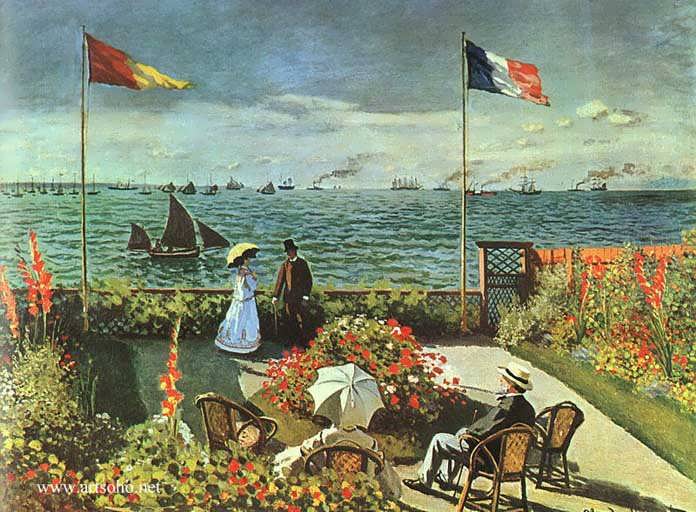 The winning entry is available here.  It's a fantasy type story with magic and a unique ritual.  The second place story actually had a similar concept to mine.  It picked up on the painter in the prompt and fused the painting with the narrative.

My honorable mention entry is a story of a woman reflecting on the end of the world.

Crystal had only ever said two prayers in her life.  Her first prayer was for a child.Crystal looked at Lucas. She didn't know how she had made it through life without him. All mothers have unseen bonds with their children, but Lucas was the single instance of connection Crystal had felt with anyone.  His father was a mere shadow in her memory. and everyone else at Lake Ekphrasis seemed just seemed distant.Crystal tried to understand the people who came to the lake. She observed them with scientific scrutiny. The women wore dresses that attempted to harness the vivid hues of wildflowers: buttercups, wild lupine, snap dragons, and scarlet columbine.  The men donned the tones of the earth: various woods like walnut or birch, and the grays, blacks and tans from slate and stone. Yet, in Crystal's eyes, the entire palette seemed to lack the luminescence and brilliance that nature could provide. It seemed almost irreverent.She'd stare into their eyes as if trying to read their soul and with every single one, she felt more and more isolated.  All of them seemed to view this place as a means to their enjoyment.  The water was there simply to provide relief from the sun that they summoned to tint their flesh.  They didn't hear the soft laughter of the lake as the wind tickled its surface.  They didn't feel the underling fabric that connected the oak to the deer and the dragonfly.Only two others could understand how Crystal felt; her son Lucas, and Malachi.  Malachi knew of the secrets of the world. He knew the pangs of longing for someone to understand the clockwork of your soul. He realized as soon as he saw Crystal, that she was a reflection of himself, and he fell deeply in love with her.   If Crystal had ever met Malachi, she might not have ever uttered her second prayer.Crystal's request was for her and Lucas to be free from everyone else, but she never imagined it would happen like this.
First, it rained blood.  It fell in fat drops, leaving crimson splotches on the boardwalk. The screams started once someone realized what it was.Then everyone started to scramble for cover.Many didn't make it. They started vanishing.  A mother disappeared as she tried to call her children from the beach. A young couple that had been lying beneath the shade of a willow simply faded out of existence.

The old man who sold balloons went away in pieces. First his leg, than arms, then a hollow hole radiated from his stomach until he was no more.
Crystal was shocked by the chaos, but for some reason, undisturbed. Even when the turquoise waters of Lake Ekphrasis dulled to slate gray and began to froth, Crystal simply held her child tighter to her bosom. Little Lucas was all that mattered, even if the world was ending. His pink fingers squeezed her hand.Malachi watched Crystal from a distance.  Tears welled in his eyes as he reached for her, wishing he could he stand beside her as the world melted away.The last of the shops disintegrated into nothingness. The world was quiet. Crystal stared into the smoky haze, wondering if she was looking at Heaven or Hell.  The fog started to lift, and where there was once a lake, sharply angled rocks, dark as midnight, ascended toward a snow capped peak. The spots of blood that stained the  boardwalk remained, but they began to morph into fireweed blossoms. The sky cleared and revealed a golden sunset. A soft, crisp wind blew over the panorama and caressed her cheek.  Crystal smiled. Lucas giggled.Malachi stood up from his easel, stretched, and sighed. He adored Crystal. Ever since he had put her and her son on canvas, he had been trying to figure out where she belonged. He brushed her lightly blushed cheek with his thumb and whispered, "welcome home my darling, welcome home."
Posted by Unknown at 11:42 AM